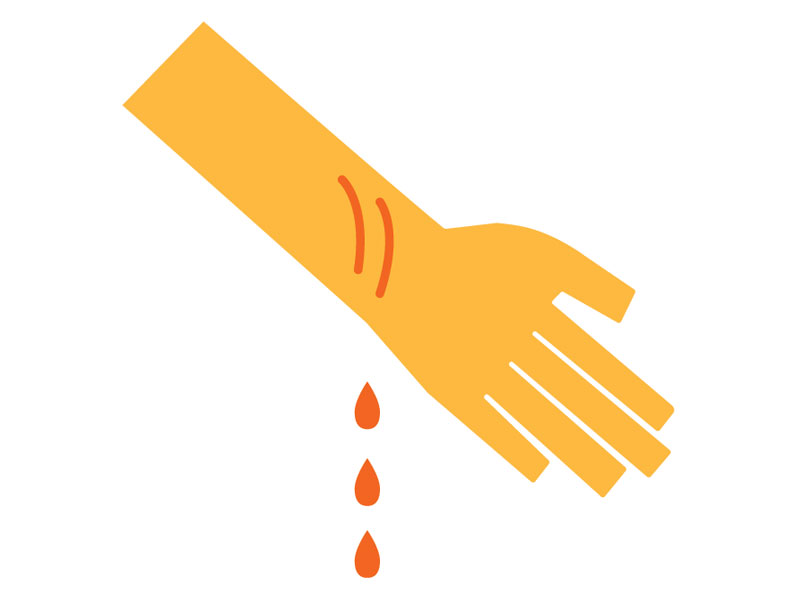 Understanding and coping with Self-Harm

People encounter stressors all the time and in such cases they may each use a different way of coping with their stress. The strategies people use to deal with their stressors may either be healthy or unhealthy (Ballesteros & Whitlock, 2009). Deliberate self-harm is one such coping strategy which is considered unhealthy (Ballesteros & Whitlock, 2009). Although there is general awareness of self-harm when linked with suicidal intent, there seems to be a certain amount of unfamiliarity around the concept of non-suicidal self-harm/Non-Suicidal Self-Injury (NSSI).

Self-harm, or “the deliberate, direct destruction or alteration of body tissue without conscious suicidal intent, but resulting in injury severe enough for tissue damage to occur” (Gratz, 2001), is often said to be used for the alleviation of intense emotional distress. This strategy often involves the replacing of emotional pain with physical pain, even if it only serves as a temporary relief. Self-harm is a behavior that is often repetitive and typically begins between ages 14 and 24 (Nixon, Cloutier, & Jansson, 2008). The incidence of self-harm is high in adolescents and higher in adolescents with mental illness. It is, however, important to note that not all deliberate self-harm exists in the absence of suicidal intent. Some statistics suggest that about 7-14 percent of adolescents would consider self-harm at some time in their life, and about 20-45 percent of older adolescents are said to have suicidal thoughts at some point (Hawton & James, 2005). Up until the 20th century, self-harm was also considered to be one-and-a-half to three times more prevalent in females than males (Yates, 2004), however recent research has not be able to establish a gender-based difference in self-harm.

According to DSM-5 NSSI disorder is when a person engages in intentional self-inflicted damage to the surface of his/her body which induces bleeding, bruising, or pain. For instance, cutting, burning, stabbing, hitting, or excessive rubbing, etc. NSSI is not very common, unlike picking a scab or nail-biting. Also, it is not like other socially sanctioned behaviour like body-piercing, tattooing, etc. it is done with an intent to cause minor to moderate physical harm. It’s criteria mandates the presence of any two of the following associated features:

2) Urge: It is difficult to resist the intent to self-injure.

3) Preoccupation: Frequent preoccupation with self-injury, even when it is not acted upon.

NSSI also causes high distress and interference in interpersonal, academic, or other important areas of functioning. Also, suicidal intent is believed to be absent as stated by the individual, or inferred by the repetitive engagement of the behaviour, which is learnt or known not to result in death.

It would then be fair to say that, what is known of self-harm so far seems to suggest that it is a problem beginning during the adolescent years, is a strategy used to provide relief to emotional pain, is predominantly devoid of suicidal intent, and there are no known gender-based differences in self-harm.

Some known types of self-harm:

There are a number of ways on which individuals may choose to self-harm. The most common form of self-harm seems to be “cutting” (Klonsky & Muehlenkamp, 2007), which involves making surface-level cuts on the arms, thighs, wrists, or other parts of the body that quite often aren’t easily noticed or are covered up. The cuts are meant to provide the individual with non-threatening and instant pain (Klonsky & Muehlenkamp, 2007). They are often not meant to cause serious or permanent damage, nor are they meant to end the individual’s life. There are also other forms of injury such as burning, scratching or pinching, carving, interfering with healing, hair pulling, ingesting poisonous substances, etc., and it is often observed on the arms, thighs, wrists, torso, or parts of the body that are usually easy to hide (Whitlock et al., 2006).

Some reasons why people self-harm:

Individuals who regularly self-harm often find that it serves various functions for them (Muehlenkamp, et al., 2013). Most often, self-harm is used to regulate intense, negative emotions like anger or frustration. In such cases individuals self-harm to calm themselves quickly when feeling overcome with emotions. Others use self-harm to evoke emotions when they feel unreal or feel nothing at all. In these instances self-harm may be used to disrupt such disturbing, dissociative experiences. Self-harm may also be used to exercise control over oneself or to punish oneself for the anger and derogation one feels for oneself (Klonsky, 2007). Then there are those who might use self-harm to connect with other self-harming peer groups (Muehlenkamp, et al., 2013). These are a few but not all of the reasons why individuals self-harm. Regardless of the specific function it serves for the individual who indulges it, self-harm is understood to provide some form of relief from existing distress (Muehlenkamp, et al., 2013).

Bubrick, Goodman, and Whitlock (2010) mention some ways to identify who self-harm:

Some things to know if you self-harm:

Self-harm is considered a non-adaptive coping mechanism (Haines & Williams, 1997), which is developed by people as a consequence of not having been able to learn a healthier way of coping with difficult situations (Kilburn & Whitlock, 2009). Mentioned below are some things to consider if you self-harm.

If you know someone who self-harms:

It can be very distressing to discover that a loved one is self-harming. You may discover unexplained injuries on them, or they may confide in you about their self-harming behavior. It is very possible that you may be feeling very uncertain about how to proceed in this situation. However, forcing someone to stop self-harming or giving them ultimatums might not work. Self-harm may be learned or developed over a course of time and giving it up suddenly may be difficult for those who have been using it as a coping mechanism.

You could help by coming to terms with your own feelings. It is very possible that you may be feeling quite disturbed or even confused by self-harming behavior. Knowing your feelings is the first step towards helping someone else with their self-harm. It is also important to maintain a non-judgmental stance and to remember that those who self-harm might need your support. By passing judgment on them or criticizing them for their self-harming behaviour you may only end up increasing the negative feelings they may associate with their self-harm. This could increase their self-harming behaviour. It would be a good idea to start to build your awareness of the problem and what it involves. This is one way of getting over your own uneasiness with self-harm and it might even allow you to be able to see things from the perspective of the friend or loved one who self-harms. Finally, it is important to remain open to communication and express your support to your loved ones and encourage them to open up to you about their feelings. You might even bring up the subject in a loving, non-confrontational way by telling them that you have noticed some marks on their body and would like to know what they are going through. It would be helpful in such situations to get your loved ones the help they need from skilled professionals.

Some myths about self-harm:

There are some common misconceptions about self-harm. For instance, it is often believed that self-harm is a suicide attempt. However, as mentioned before self-harm is often an alternative to suicide and is a mechanism of surviving difficult experiences. Then there is the belief that those who self-harm are using it as an attention seeking mechanism. Many who self-harm try hard to keep their injuries from others. It may be a silent cry for help but is often not just attention seeking behavior.  Finally there is the belief that it is only teenage girls who self-harm. As mentioned earlier, there is no known gender-based difference in self-harming behavior and is not limited simply to young girls.

How counseling can help:

A number of strategies like directing feelings or attention into other activities, recognizing the triggers, gaining support from self-help groups, and getting professional help can be used to disrupt the behavioural pattern of self-harming. Counselling is a safe, confidential, and non-judgmental environment for individuals to try and discover what lies at the heart of their self-harming behavior. This is a good way for individuals to talk through their problems and identify new coping strategies. There may be times when counselling will be used at the same time as an individual is attempting distraction strategies for self-harm. Those who self-harm are often in a vulnerable state of mind, so if you know someone who self-harms, reach out to them and help them get the support they need.

Remember that we here at iCALL care for your well-being and are available to support you, both over the phone as well as over email whenever you need us. If you feel the need for help right now and want to talk to a counsellor, you can us at 022-25563291 or 022-25521111 any time between 10 AM and 10 PM from Monday to Saturday. Our counselors can speak in English, Hindi, Marathi, Gujrati, Tamil and Malayalam. You could also email us at icall@tiss.edu.